A downloadable game for Windows

You are the captain of a modern era cargo ship! You know people are stranded alone, along the coasts of various countries with nowhere to go to. Their homes destroyed and their land ridden with war. You know they have no home to return to, and you know that you yourself can’t do much - BUT you own a cargo vessel and you want to try!

You must manage your fuel and finances wisely to save as many refugees as possible. You can’t help if you can’t afford to run your boat. Be wise about the distances you travel and the resources you purchase. Worry not! Charities will donate money to your cause and help you stay afloat!

With the Ludum Dare theme being “running out of space”, we wanted to create something meaningful and moderately relevant. Whilst skimming through ideas within the first few minutes of the Game Jam, we thought of refugees and how ships have a limited amount of space to save as many people as possible. We instantly knew this should be the main point of our game. Saving as many poor/unfortunate refugees as possible.

Our game started as a little sapling with few ideas and the main point being our primary objective. With one of our team members loving boats, he decided to start working on a ship idea. He sent us pictures of real life boats. We had to make a tough choice whether to base our in-game ship off of a real life ship or not. However, we opted to go with a more fictional approach as to not upset or offend the players.

With the boats sorted we still needed to make a game. There is no point trying to focus on a real world subject via a game if we can’t make people play! We needed to motivate players. We needed an end-goal.

Will, the man, the myth, the legend, came up with a system that would provide the players with a score based on how many refugees they save! The system spawns a random number of poor souls along the coasts of the islands on our moderately vast map, and then gathers the percentage of the refugees that you have rescued!

This was good, but we needed more. We needed a challenge. We had fuel but there was no real punishment. We discussed it as a team and Khalid came up with pirates. Maybe it’s not super realistic, but we needed something to taunt the player. Something that would take from the player that the player could not control. Khalid worked on it long and hard and suddenly we had these amazing pirates that are so annoying because they steal vital resources from you.

We had all of that but we needed more! James was already on it! He developed a beautiful market system that allowed the player to gain resources via currency. Everything was so thought out it was wonderful! He embodied his creation into one single port - “Port Moresby”.

Finally, we had a something. Not sure if it was a game or the lid of a food waste bin, but it was a something!

With all of us being artistically numb (except for Will) when it comes to 2D art, our game looked terrible! Will overhauled the entire system to look fantastic. Lighting tweaked, camera adjusted and textures perfected! The game was finally becoming a game.

Finally, our game was still mute. James’s lovely voice filled the world with life! Voices lines were made for everything! Yes! Every sound in the game was made with James’ curvy mouth except for the music! 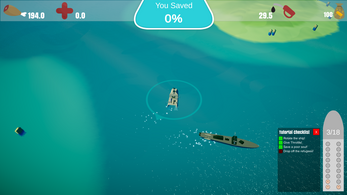 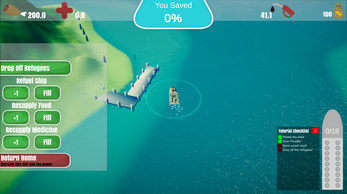 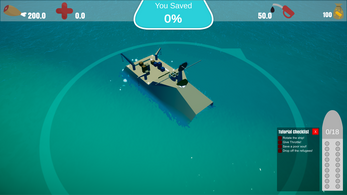